Citizens are not an object of democracy. Citizens are, in fact, indispensable participants. As a former mayor of Dubrovnik, I learnt that all politics is local. The grass roots are important and must be nurtured. I see the intense efforts of mayors and local councillors who are dealing first hand with issues that affect citizens. Municipalities create networks and links with local people, making a tangible difference to citizens’ everyday lives. I believe that mayors and local and regional authorities were key to the success of the Conference on the Future of Europe, and are key to making our democracy fit for the future – for all generations. The Conference gave citizens the opportunity to jointly deliberate in an inclusive, safe and transparent public space. This reinforces our representative democracy. The fact that this exercise took place has changed our political culture. There is no going back.

by Dubravka Šuica, Vice-President of the European Commission 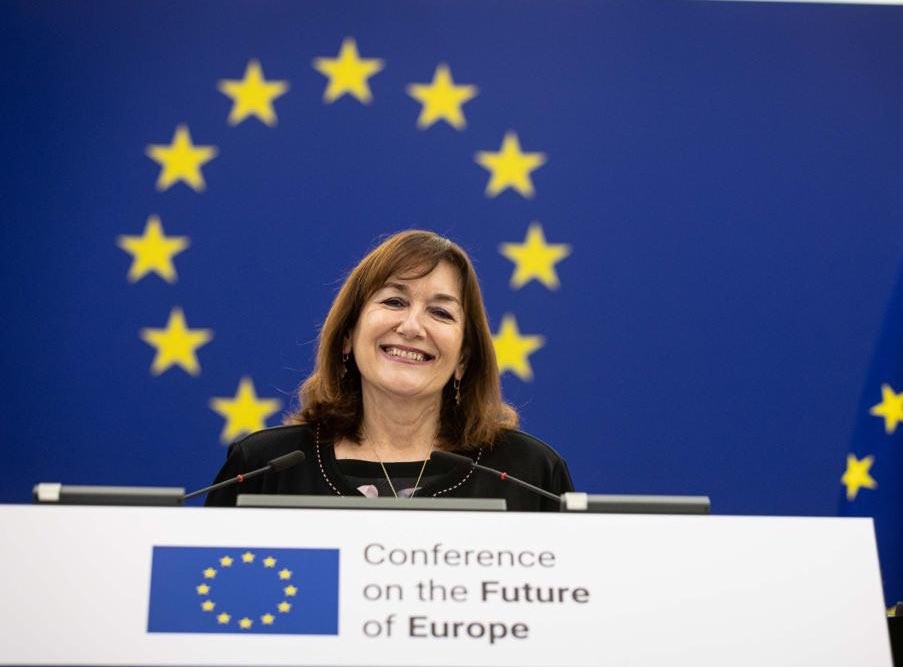 Conference on the Future of Europe – from scepticism to engagement

At the beginning of the Conference, which I co-chaired, I heard a lot of scepticism from citizens, civil society and elected representatives. But as the process evolved, as the deliberative methodology became familiar, as citizens engaged with each other, with civil society and with politicians, the sceptics realised that they were doing something truly exceptional. The concrete proposals generated at the Conference are proof of that.

The core idea behind the Conference is that deliberations about the future of the European Union take place at all levels. Across borders and languages. Across cultures and histories. Leaving no-one and nowhere behind. Citizens are at the heart of the Conference process. Their input into the multilingual digital platform fed into the deliberative process through the European Citizens’ Panels and the Plenary. It is vital that we improve participation in online forums like these. This input has laid the basis for our work today, as well as for the future. From the very beginning of the Conference process, I have trusted citizens to engage and deliver. They have done a fantastic job. Citizens have been deliberating, giving up their weekends to tell us about the major challenges they would like us to address, including citizen engagement, climate change, digitalisation, the fragile global order and the ongoing COVID-19 pandemic. And most tellingly, they asked us to look at making citizen engagement and deliberative democracy a permanent feature of the EU’s democratic landscape. The citizens have given us our homework. In the feedback event planned for 2 December, we must deliver concrete results for citizens.

Municipalities across the European Union are hives of all sorts of activities: economic actions, knowledge creation, innovation, and citizen and community engagement. Local and regional authorities engage with various actors to find solutions to the challenges of the 21st century. They are vibrant places where citizens of all ages can deliberate on their future. So many authorities engaged with the Conference by organising events, raising awareness and promoting the Conference’s multilingual digital platform. Local administrations can play a crucial role in relaying feedback on the Conference on the Future of Europe. But not only that –  they can also generally bring the European Union closer to citizens. The “Building Europe with Local Councillors” project was launched to facilitate this, creating a European network of locally elected politicians designed to communicate with the European Union through an unprecedented alliance between European and local government structures. I believe that the voices of municipalities are crucial in building a democracy that is fit for the future. And although the deliberative phase of the Conference has ended, this does not mean that the work of the municipalities stops there. They can build on the strong foundations of the work they carried out during the Conference and continue to consult citizens, both online and offline, in their bid to strengthen citizens’ civic identity and participation in democracy.

Online engagement – making sure we leave no-one and nowhere behind

At the EU level, we hope to inspire local, regional and national authorities. The Conference’s multilingual digital platform enabled, for example, a Finnish citizen to engage with a Portuguese citizen, each in their native language, on the issues close to their heart. The platform was a central hub of the Conference where people could come together and share their ideas. This was particularly useful in the context of COVID-19 where opportunities to meet in person were – by necessity – drastically reduced. The ideas from the digital platform fed into the European Citizens’ Panels and the Plenary, where the proposals were formulated. Without this tool, we would not have been able to reach so many citizens in every corner of the EU. Building on this knowledge, we are revamping the Have-Your-Say portal as it becomes a one-stop shop where citizens can engage in democracy and policy-making at EU level.

A democracy fit for the future

The Conference has laid the ground to help us reinforce our democracy. Democracy is not static; it is constantly evolving. Our democracy and the democratic institutions that underpin it must be fit for the future, and in a position to respond to citizens’ needs. Following the Conference, in her State of the Union address on 14 September, President von der Leyen announced that “the Citizens’ Panels that were central to the Conference will now become a regular feature of our democratic life” and will be embedded in our policymaking process. The first such panel will be on food waste and start work in the coming weeks. More panels, focused on issues that are important to citizens, will follow and their proposals will be integrated into the EU’s policy-making process. Young people will again form one third of these panels.

Embarking on the journey of child participation – navigating the digital ocean

We often say that children and young people are our future. But they are also our present. The sight of young people taking to the streets around the world, calling for climate action and speaking out to defend human rights is testimony to the fact that children are active citizens and agents of change. They are increasingly using social media and other digital tools to mobilise and advocate for their goals. The EU recognises that children should be supported in developing practical citizenship skills, and be able to deliberate on and discuss matters that concern them online as well. This area has not yet evolved sufficiently and has great potential in terms of democratic innovation.

As a direct response to young people’s call for greater engagement in democratic life, we are now establishing the EU Children’s Participation Platform (CPP).

The CPP will bring together existing child participation mechanisms at the local, regional and national level and connect them with one another. Young people now have a direct link with EU institutions, enabling them to feed ideas into EU decision-making processes and strengthening child participation capabilities. The CPP’s activities will also have a spillover effect as child participation will become more widely utilised and supported at all levels of governance. The Child Participation Platform has four main objectives. Consultative: the CPP will allow EU institutions to collect children’s views, across several EU member states, on matters that concern them – and to consult children on specific future policies and legislative initiatives proposed by the Commission. It will contain research and child-friendly information: the CPP will contribute to the production of ad-hoc research and papers on topics related to child participation, including documents in child-friendly language. It will be a learning hub and foster capacity building by contributing to an exchange of practices and experiences on child participation. Most importantly, it will provide a safe space for children to express their views and opinions, and debate with each other and other stakeholders. This digital platform will become an important tool to help us instil a culture of meaningful child participation across the EU.

Today’s children are tomorrow’s voters. If we are serious about building resilient democracies and societies we need to start with the youngest generation –  offline and online.

I believe that every generation can actively contribute to our democracy. The work of the Conference is a clear example of this – the participants were aged between 16 and 87. The upcoming European Citizens’ Panels will extend this engagement and deliberation with citizens. In itself, this exercise in deliberative and participatory democracy is in stark contrast to the Kremlin’s aggression in Ukraine, which aims to stifle freedom, openness and debate. It is part of an ecosystem of democratic innovation at the EU level that helps democratic institutions – which are designed to serve citizens – to respond more effectively to citizens’ needs, both online and offline. But we cannot succeed alone. That is why we continue to work closely with all actors at all levels, from municipal and regional to national. Together, we can build a democracy fit for the future.

Here you can read more about Dubravka Šuica, Vice-President of the European Commission, and her work.