In May 2021, Bulgaria’s parliament passed a law making the use of voting machines compulsory—making it the first European country to use the technology on a large scale. But since the law came into effect, public trust in the machines has suffered as the result of sustained disinformation campaigns. A cautionary tale for democracy technology providers and political innovators everywhere. 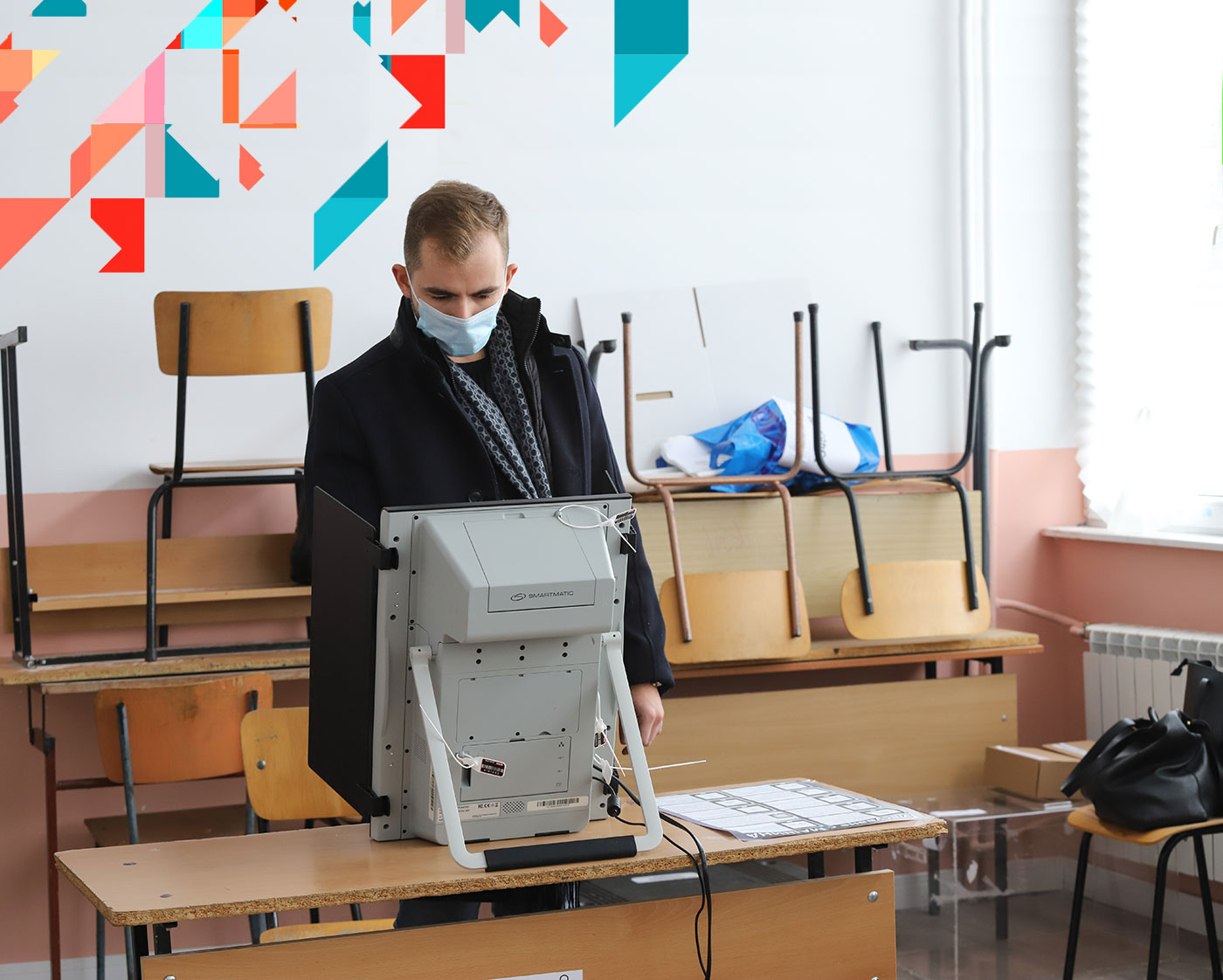 A vote is cast using a voting machine at a polling station in Sofia, Bulgaria on Nov 14, 2021

When Bulgarians go to the polls on 2 October 2022 for the country’s fourth parliamentary elections in just 18 months, they will be among a minority of Europeans who cast their ballots not on paper, but via touchscreen. In May 2021, the short-lived 45th National Assembly passed an amendment to the country’s Electoral Code, making the use of electronic voting machines compulsory at all polling stations with 300 or more registered voters.

The amendment was introduced in an attempt to address persistent problems with unusually high numbers of invalid paper ballots, as well as allegations of vote-buying. Efforts to overturn the change began immediately, including by Citizens for European Development of Bulgaria (GERB), the party of Bokyo Borisov, who served as Prime Minister for much of the period between 2009 and 2021.

Nonetheless, the amendment has so far survived, and the July 2021 general elections and the November 2021 combined general and presidential elections were conducted using more than 9,500 electronic touchscreen machines provided by the Sofia-based firm Ciela Norma in partnership with Smartmatic.

International observers noted that the machines succeeded in virtually eliminating the problem of invalid ballots. Yet the public perception of the machines in Bulgaria has suffered in the wake of a barrage of disinformation. During both the July and November 2021 elections, GERB representatives repeatedly claimed that the machines were being tampered with by unverified specialists, in spite of offering no evidence in support of their claims.

The situation came to a head when, just eight days before the general and presidential elections on 14 November 2021, 228 unregistered machines turned up in warehouses around Sofia, triggering a wave of wild speculation and unfounded claims.

Bulgaria is an exception to the European rule: Although they are in wide use in the USA, voting machines are conspicuous by their absence in most of Europe. Several European countries have trialled the technology over the last two decades, yet none have introduced them on a large scale. Attitudes remain sceptical, and de jure or de facto bans on their use are in place in several countries, including Germany and the Netherlands.

Bulgaria first started experimenting with the use of voting machines during the 2014 European parliamentary elections. Legislation making their use compulsory was passed for a first time back in 2019, but the decision was overturned in 2020, leading to the adoption of a hybrid model using both machine voting and paper ballots. It was during the short-lived 45th National Assembly of April and May 2021 that the party “There Is Such a People” (Ima Takav Narod) proposed the amendment anew, and it was passed with the support of several other parties.

The measure was intended to combat the high number of invalid ballots in prior elections—4.6% in the 2017 parliamentary elections, and as much as 15.1%, or 466,077 votes, in local elections that same year—in both cases, more than enough to have a decisive impact on the outcome of the election. It was also intended to address persistent problems with vote-buying.

There have been several attempts to reverse the amendment since it was introduced, spearheaded by GERB, as well as the Bulgarian Socialist Party (BSP, the successors of the Bulgarian Communist Party), MRF (Movement for Rights and Freedoms, a party for Bulgaria’s Turkish minority), and the pro-Kremlin party Revival. An attempt to reverse the amendment failed by just one vote in June 2021.

In their report on the combined general and presidential elections of 14 November 2021, observers from the Organization for Security and Co-operation in Europe (OSCE) noted that the machines have had the desired effect of reducing the number of invalid votes. Similarly, a report by a delegation from the Parliamentary Assembly of the Council of Europe (PACE) described the overall impact of the machines as “positive.”

Nonetheless, both observer teams also raised several concerns about the use of machines. In particular, they suggested that the interface design was confusing, especially for people with limited computer literacy. The design led several people to accidentally exclude themselves from one of the two elections taking place on 14 November.

More generally, the rapid introduction of the machines—with just two months between the amendment passing and the July 2021 general election—did not leave adequate time for a public information campaign to instruct citizens on using the machines.

These legitimate concerns, however, were largely drowned out in the public discourse by outright disinformation, much of which can be traced back to sources within GERB.

Goran Georgiev, an Analyst at the Center for the Study of Democracy in Sofia, is among those who followed the developments closely. He told Democracy Technologies that on the day of the 11 July 2022 general election, GERB’s leader Borisov described the elections as “Venezuelan-like”, and claimed that unverified specialists were tampering with the voting machines, without providing any evidence in support of his claims. Georgiev points out that the election was the first in 12 years in which GERB did not emerge as the largest party in parliament.

The wave of disinformation grew more intense in the build-up to the combined general and presidential elections of 14 November 2021. On 6 November, just 8 days prior to polls opening, Borisov used a Facebook livestream to reveal that 228 additional voting machines had been discovered in storage in warehouses around Sofia. He claimed that the machines had been imported to manipulate the election, and that this amounted to stealing “228,000 votes.”

It transpired that there were indeed 228 machines in storage in warehouses which were not registered for use in the elections. But provider Ciela Norma refuted GERB’s claims, stating that the machines were for use in demonstrations outside of Bulgaria, and had no connection to the elections. A report published on the website of the Central Election Commission (CEC) on 3 November confirms that Ciela Norma had in fact already declared the presence and purpose of the machines to the CEC.

Nonetheless, the CEC decided to have the machines in question seized until their purpose could be conclusively established.

Georgiev explains that in the days that followed, GERB continued to make further unsubstantiated claims. On November 8, another livestream on Borisov’s verified Facebook account claimed that two brothers, one from the CEC and one at the Agency for E-governance, had “access to the machine codes”, and would use it to manipulate the election results.

Then, during an appearance on the popular TV show “Hello Bulgaria”, Borisov claimed that the actual number of machines to be used in the election remained unknown, and that the whole election was in the hands of four people (including the two brothers previously mentioned)—all of whom he claimed were closely associated with political opponents of GERB. He added that a manipulated code was to be uploaded to the machines via USB “in the nights” before the election. No evidence was advanced in support of any of these claims.

In a subsequent court case, Ciela Norma was cleared of wrongdoing, and the machines returned to them. In spite of this finding, however, the damage to public trust had already been done, and disinformation about the machines continued to circulate online.

“Electronic voting machines, election systems and election processes in general are particularly vulnerable to disinformation. Bad actors systematically disseminate lies to undermine elections by inciting fear, anxiety and distrust among voters. It is unfortunate that fake news has become part of the election lexicon. It is a harsh reality we must confront.”

This is not the first time that e-voting technology has been subjected to disinformation campaigns. During the US 2020 Presidential elections, Donald Trump used his Twitter account to launch a series of attacks on machines provided by Dominion Voting Systems, who provided machines in 28 states. Among other things, he claimed the machines had “deleted 2.7 million Trump votes”, and that the company was owned by the “radical left”.

A group of right-leaning media organisations have been accused of perpetuating his claims uncritically. At present, both Dominion Voting Systems and Smartmatic are pursuing legal action against Trump’s lawyer Rudi Giuliani and several media outlets in the United States, including Fox News, for allegedly spreading baseless and damaging claims about the integrity of their machines.

Media outlets played a similarly decisive role in spreading the disinformation in Bulgaria. Georgiev claims that a lack of media impartiality in adds to the problem:

“There is a particular segment within Bulgarian media, including several highly popular mainstream outlets, that basically move in unison with GERB. These outlets are characterized by their hyper-sensationalist and misleading tabloid-like content. (…)Not only did these outlets cover GERB’s claims about the voting machines as fact without providing any competing information, but the opinion pieces published on their websites promoted the exact same claims in the months leading up to the November elections.”

As things stand, the election on 2 October will go ahead using voting machines. The Bulgarian News Agency BTA reports that on August 9, the President of Bulgaria Rumen Radev called for measures to be taken to increase voter confidence in the machines. He is quoted as saying:

“Machine voting has proved to work for dramatically reducing invalid votes and tally sheet errors and manipulations, and has helped contain vote buying. That is why we need to have a clear methodology and public and transparent actions to reassure political parties and people that the machines are not tampered at any stage of the election arrangements.”

He added that awareness campaigns are necessary to ensure that voters are better informed about the technology.

Meanwhile, it may not be long before attention shifts away from the voting machines towards a new object of controversy. The Sofia news agency Novinite reported in April 2022 that the country’s Ministry of Electronic Government is currently investigating the possibility of remote electronic voting, based on the system already in use in Estonia.

If they opt to adopt the technology at some point in the future, Bulgaria’s electoral commission will have a twofold struggle on its hands: first, to ensure the security and integrity of the election; and second, to combat the flow of disinformation, ensuring that baseless claims do not further undermine public trust in e-voting technology, and in the nation’s democratic institutions as a whole.

Do you think voting machines are already safe enough to be used in general elections?